Anxiety over the coronavirus and signs of an economic retreat are creating a nightmare for public market investors. For the private markets, the same turmoil will test the resilience of private debt deals while also accelerating bargain hunting by distressed-debt investors in particular.

Investors' strong appetite for private debt funds has left managers sitting on about $273 billion of dry powder as of June 30, according to PitchBook data. Around $66 billion of that capital is held by managers focused on distressed debt—a class of riskier investments in troubled companies with the potential to offer bigger returns—and they may now have a juicy opportunity to unleash that backlog of dry powder. 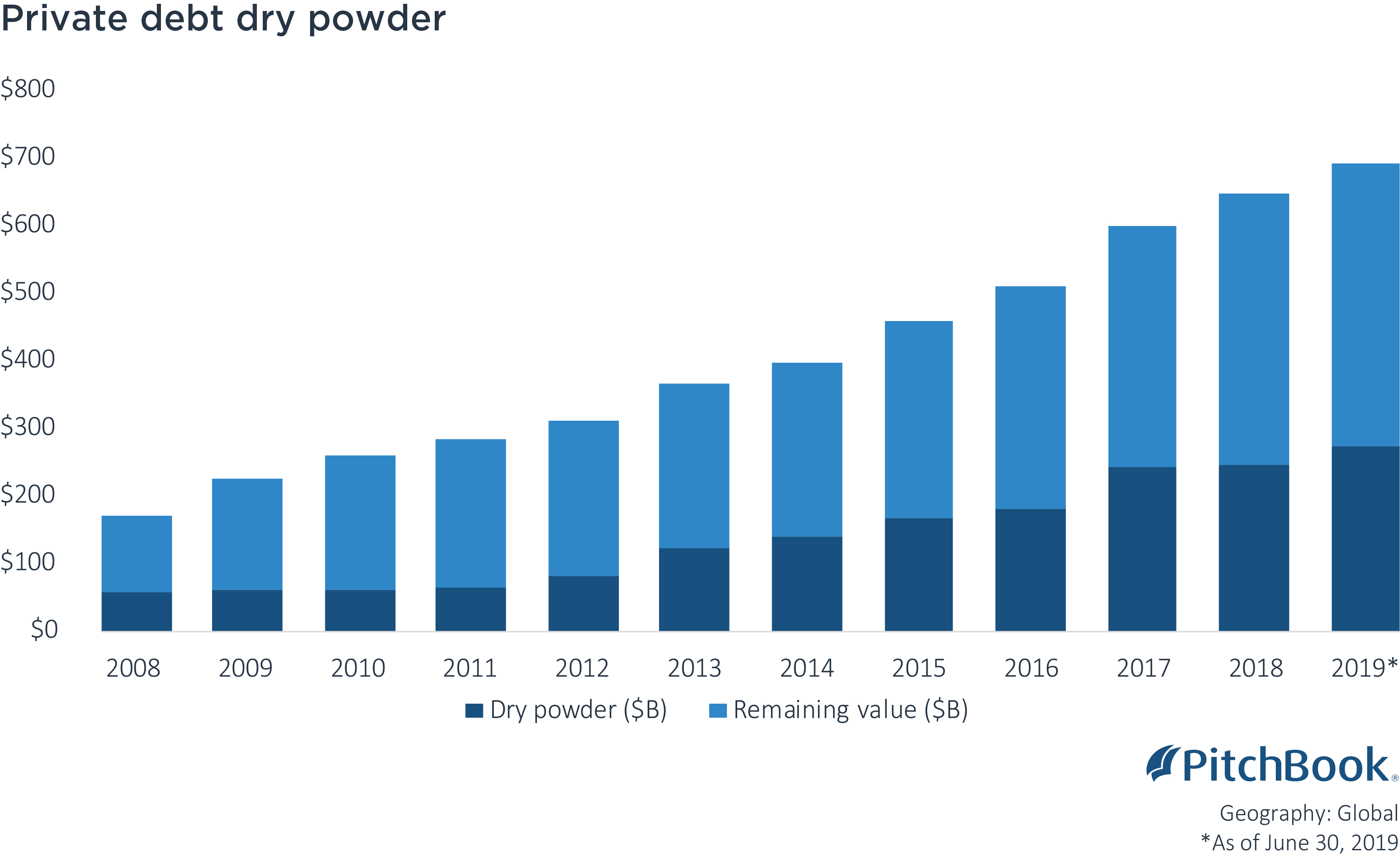 "The distressed players have been looking for a time to deploy, and the current volatility very much plays into their hands," said John Bohill, a Dublin-based partner with asset manager StepStone Group, adding that investors will seek opportunities as more borrowers feel the pinch. "There will be an ability to get involved in a quality business undergoing short-term liquidity issues," he said.

Dealmakers may also find the new environment for debt deals more attractive given how low interest rates have been getting.

"If you are a private debt lender and you've got capital to deploy, you will probably find better opportunities at a better yield than you have for the last few years," said Romain Cattan, a London-based managing partner with the private debt advisory firm Marlborough Partners.

At the same time, Cattan added, some investors are likely to be much more conservative in the face of economic and market uncertainty, resulting in more expensive leverage as lenders get more risk-averse.

Bohill said private debt capital strategy is playing out on two tracks, concentrated on riskier, high-return opportunistic investments on one hand, and low-risk, low-return investments on the other. The latter, he added, could turn out to be a safe harbor in a volatile environment, Bohill said.

If this does prove to be a long-anticipated market downturn, it could also be a much-needed test for many debt managers who have yet to invest during a crisis comparable to that of 2008. Over the past decade, the private debt industry has grown in tandem with private equity, with GPs increasingly looking to alternative debt providers as the banks have sought to deleverage debt.

Now that debt managers' deal flow is tied to financing of buyouts, there are concerns that private debt investors—looking to maintain relationships with PE sponsors—won't be able to forgo bad deals if they want to stay in the pipeline of future opportunities.

Many have sought to mitigate risk in their portfolio with investments in senior secured debt where protections are stronger, in the case of a default. "I think for existing portfolios it will actually be quite healthy for the industry to prove itself," Bohill said.

A significant number of investors are new to the private debt market since the last crisis and haven't invested through a cycle following a downturn. When markets crashed in 2008, banks had yet to begin a wholesale retrenchment from the corporate bond market. The private debt market—which would later fill the gap—was still in its infancy.

Investors may soon learn whether the latest bout of turmoil is just a short-term crisis or something more like a black swan event that will usher in a market downturn.

Bohill added: "I actually think the private debt market has needed something like this for a while as a sanity check to make sure it's heading in the right direction and make sure that everybody is using the same conservative underwriting outlook."