March 15, 2022
Despite VC-backed IPOs regaining strength after hitting a low in 2016, it’s still a relatively complex, lengthy and expensive process for companies. Unicorns like Blue Apron struggled upon entering the public market—and it's still trading far below the initial share price.

Faced with the challenges of an IPO, some companies and their investors are exploring alternatives to IPOs. In this blog, we’ll talk about two of these alternatives: special purpose acquisition companies (SPACs) and direct listings.

What is a SPAC (special purpose acquisition company)?

A special purpose acquisition company (SPAC) is a publicly-traded buyout company that raises capital through an IPO in order to purchase or gain a controlling stake in a company. SPACs are also known as blank check companies because the target company is unknown at the time of the IPO. After the SPAC goes public, it typically has around two years to acquire one or more companies. When a company gets acquired by a SPAC, it goes public without paying for an IPO. All the fees and underwriting costs are covered before the target company ever gets involved. These opposite approaches to how long each company is on the market are the key difference between SPAC and IPO price valuation. Because SPACs can’t be traded as much or to as many people as IPO shares, their price can be determined much sooner, but also miss out on some of the growth potential of an IPO.

Large private equity firms like TPG and The Carlyle Group have acted as sponsors in the SPAC market. Household brands like Hostess or newer companies like DraftKings have gone public by merging with SPACs. 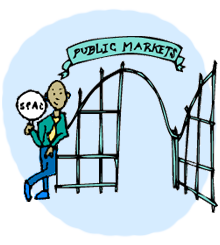 While this blind buying process could seem like a downfall, it can actually help stabilize a company when it makes its public debut. Proponents of the strategy have said that traditional IPO investors have a “short-term mindset” that can result in initial mispricing and other long-term consequences.

Despite the low-cost advantage, SPACs can be risky because investors have the right to withdraw their investments if they’re unsatisfied with the target company. Even though the management team has incentive to identify the best acquisition (they do retain a 20 percent finder’s fee after all), they still bear the risk of losing investors. If too many shareholders retract their capital, the SPAC may pull out of the deal.

In 2020, SPACs started to dominate the IPO scene, raising more money than other traditional IPOs—and the frenzy doesn't seem to be slowing down. When the coronavirus pandemic rattled many IPO plans, SPACs kept going public. One reason is that a SPAC's value is tied to how much it raised from investors, so it's less susceptible to the ups and downs of the market. Investors also believe that a recession could lead to more buying opportunities for SPACs.

What is a direct listing?

Direct listings eliminate the need for a roadshow or underwriter, which saves the company time and money (an underwriter normally receives five to eight percent of the capital raised during an IPO). In preparation for its recent direct listing, Spotify hired several advisors for a flat fee—which also kept costs down.

Additionally, direct listings give shareholders the opportunity to sell their stake in the company as soon as it goes public, without experiencing the holding period they normally would with an IPO. But, there are risks associated with removing the safety net underwriters and lock-up periods provide.

To help mitigate some of the risks, companies like Spotify have turned to secondary transactions. Secondaries give shareholders the chance to sell equity before a direct listing and provide a level of price discovery, which may reduce early market volatility.

To understand these trends in greater detail, be sure to check out these additional SPAC research pieces from our analysts. They answer questions like 'Does valuation matter when it comes to choosing a path to go public?' and 'How have SPACs taken over the mobility industry?'